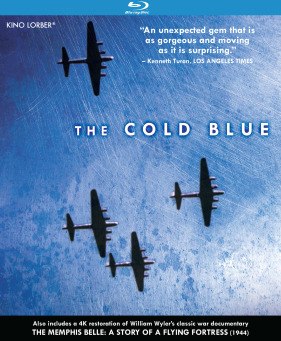 The Cold Blue is a stirring tribute to the men of the Eighth Air Force, who flew deadly missions during World War II. Half of the U.S. Army Air Force’s casualties during the war were suffered by the Eighth. Director Erik Nelson tracked down nine of the surviving Eighth Air Force veterans to recall the harrowing experiences they endured in the summer of 1943.

The Cold Blue features newly restored 4K footage and outtakes shot by director William Wyler (Oscar® winner for The Best Years of Our Lives, Ben-Hur and Mrs. Miniver) for his 1944 short documentary The Memphis Belle: A Story of a Flying Fortress (also included on this disc). Wyler went to Europe in 1943 to film the air war in progress, where he and his crew flew actual combat missions on B-17s, during which one of his cinematographers was killed. Incredibly, all of the raw color footage Wyler shot for The Memphis Belle was recently discovered in the vaults of the National Archives, which has undergone a stunning frame-byframe 4K restoration by Nelson and his team, and is incorporated to illustrate the veterans’ remarkable stories.

The Cold Blue is a meditation on youth, war and trauma, and a testament to the courage of the men of the Eighth Air Force.

New 4K Restoration of The Memphis Belle: A Story of a Flying Fortress (1944, directed by William Wyler, 45 minutes)

Into the Cold Blue: Restoration and Reinvention (22 minutes)