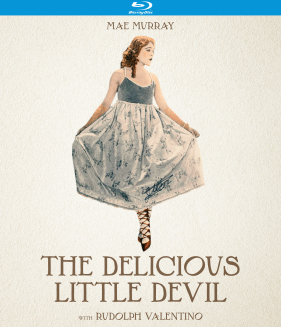 The Delicious Little Devil (1919) is a delightfully risqué silent comedy starring Mae Murray and Rudolph Valentino (The Sheik), presented in a 4K restoration by Universal Pictures. Murray stars as Kitty Maguire, the virtuous daughter of a washerwoman who loses her job as a hat-check girl. She is forced to make ends meet as a dancer at a roadhouse cabaret, but she can only get the job by pretending to be Gloria du Moine, the notorious mistress of the Duke de Sauterne (Bertram Grassby). Mary falls in love with Jimmie Calhoun (Valentino), who is wary of marrying her because of her supposedly sordid past, and the film careens to a rollickingly funny conclusion as her true identity is revealed.