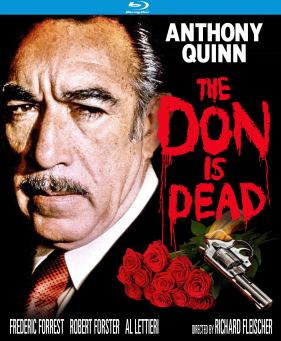 The Don is Dead (Blu-ray)

From Richard Fleischer, the outstanding director of The Narrow Margin, Compulsion, The Boston Strangler and Mr. Majestyk, comes this action-packed mob classic starring screen legend Anthony Quinn (Across 110th Street). Power Built an Empire… Passion Destroyed It! When the reigning Don dies, a bloody, all-out power struggle ensues to determine who will be the next Capo. Don Angelo (Quinn), a notorious crime czar, is poised to take control of the Syndicate. But when he discovers that an ambitious lieutenant (Robert Forster, Jackie Brown) from his own family has become a rival for the love of his beautiful mistress, the Don vows to turn the streets red with the blood of the traitor, triggering an internal mob war of wills and weapons in this hard-hitting tale of betrayal, ambition and revenge. Based on a novel by Marvin H. Albert (Duel at Diablo) and co-starring Frederic Forrest (Hammett), Al Lettieri (The Getaway), Joe Santos (TV’s The Rockford Files), Abe Vigoda (Newman’s Law), Victor Argo (Taxi Driver), Sid Haig (Busting) and Vic Tayback (Special Delivery).