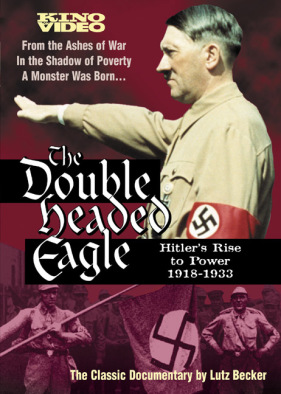 From the Ashes of War In the Shadow of Poverty A Monster Was Born...

A fascinating experiment in documentary filmmaking, THE DOUBLE HEADED EAGLE charts the stealthy rise of the Nazi party in the wake of World War I, as witnessed from the perspective of a neutral bystander.

Rather than offering a contemporary interpretation of history through narration and interviews, filmmaker Lutz Becker allows the disturbing saga of German fascism to unfold on its own terms. The rise of the Socialist National Party is depicted almost exclusively in newsreel footage and clips of features from the period. The result is a kaleidoscopic view of the German people 1918-1933, suffering the economic and human devastation of World War I, experiencing the rebirth of its culture and economy during the Weimar Republic, and allowing its festering racism, paranoia and lust for military strength to spread and become embraced as a system of political beliefs.

In THE DOUBLE HEADED EAGLE, one catches glimpses of Adolf Hitler when he was little more than a young political enthusiast, at the time when the Nazi party was the domain of a handful of extremists. The most chilling aspect of THE DOUBLE HEADED EAGLE is the gradual, almost invisible growth of the party over the course of the film, concluding with the fiery celebration of the Nazi assumption of power in 1933.

"The best of the Hitler documentaries." -The London Sunday Times