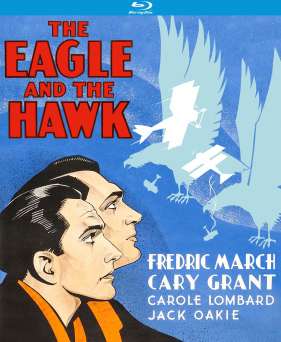 The Eagle and the Hawk (Blu-ray)

Screen legends Cary Grant (North by Northwest), Fredric March (The Sign of the Cross) and Carole Lombard (Nothing Sacred) star in this classic World War I film in the tradition of All Quiet on the Western Front. The Eagle and the Hawk is a powerful anti-war drama in which Grant and March play rival pilots with opposing codes of honor. Based on a story by John Monk Saunders (Wings, The Dawn Patrol) and featuring memorable supporting roles for Jackie Oakie (The Great Dictator) and Sir Guy Standing (Death Takes a Holiday), The Eagle and the Hawk is the film that The New York Times called “a drama told with a praiseworthy sense of realism.” With top-notch direction by Stuart Walker (The Mystery of Edwin Drood), The Eagle and the Hawk still packs a punch more than 75 years later.