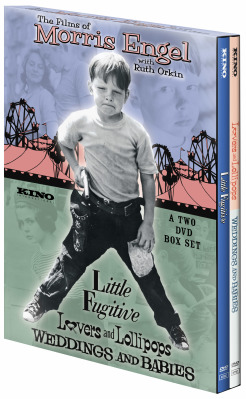 The Films of Morris Engel (with Ruth Orkin) (DVD)

Widely regarded as one of the most influential and enjoyable films of the American independent cinema, Little Fugitive is an utterly charming fable that poetically captures the joys and wonders of childhood.

When a seven-year-old boy (Richie Andrusco) is tricked into believing he killed his older brother, he gathers his meager possessions and flees to New York's nether wonderland: Coney Island. Upon and beneath the crowded boardwalk, Joey experiences a day and night filled with adventures and mysteries, resulting in a film that is refreshingly spontaneous and thoroughly delightful.

Hailed by critics as a groundbreaking cinematic feat, Little Fugitive won the Silver Lion at the Venice Film Festival, played in nearly 5,000 theatres in the U.S. and is now recognized as a classic of American independent film.

LOVERS AND LOLLIPOPS
A Film by Morris Engel and Ruth Orkin

A follow-up to the hugely successful Little Fugitive, Lovers and Lollipops is the enchanting tale of a seven-year-old girl's reaction to her mom's new boyfriend.

When an attractive widow begins seeing an old friend, her daughter Peggy (Cathy Dunn) feels their relationship threatened. Though not always intentionally, Peggy responds by thwarting the romance that is blossoming between the two adults.

Shot on location among the landmarks of New York City & the Central Park Zoo, Macy's Toy Department, the Statue of Liberty and Chinatown & Lovers and Lollipops is a lyrical ode to the resilience of love and the charms of youth.

A work of artistic finesse and great emotional candor, Morris Engel’s Weddings and Babies is a bittersweet tale of love, hope and sacrifice, staged to perfection amid the sidewalks and storefront apartments of New York's Little Italy.

Viveca Lindfors stars as Bea, a Swedish-born woman who yearns to begin a family with her photographer boyfriend Al. But the two things to which Al has devoted his career, weddings and babies, are the very things he cannot make room for in his life. The unexpected appearance of Al's aging mother, evicted from a boarding house, only intensifies his familial confusion, and Bea must decide whether to wait for Al or seek happiness elsewhere.

With its verite visual style and naturalistic performances (owing to Engel's background as a photojournalist in New York City), Weddings and Babies bore a profound influence on the independent cinema of the 1960's.

LITTLE FUGITIVE
“Our New Wave would never have come into being if it hadn’t been for the young Morris Engel...with his fine LITTLE FUGITIVE.” – François Truffaut
“A riotously funny view of humanity.”– NEW YORK NEWS

WEDDINGS AND BABIES
“ONE OF THE YEAR’S TEN BEST!...One of the most exciting feature films the U.S. has produced in a decade.” – TIME MAGAZINE
“Morris Engel has conjured a classic.”– New York Daily News 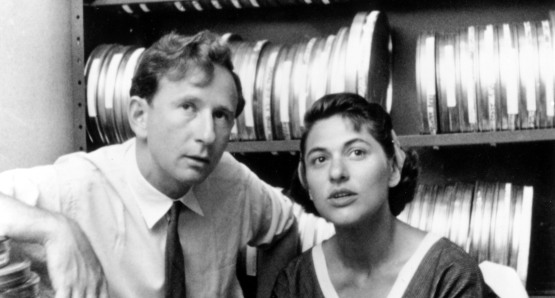