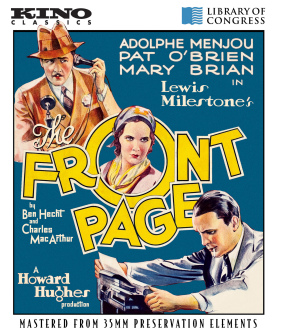 Raucous, irreverent, and remarkably funny, THE FRONT PAGE is a landmark in cinema history ; a brilliantly orchestrated, high-speed satire that set the standard for the countless screwball comedies that followed in its wake. But few films can match the risque flavor and the relentless pace of the masterpiece that spawned an entire genre, earning Academy Award nominations for Best Picture, Best Actor (Adolphe Menjou), and Best Director (Lewis Milestone), as well as a spot on the esteemed National Film Registry. Based on the wildly successful (and controversial) play by Ben Hecht and Charles MacArthur, THE FRONT PAGE follows hard-boiled crime reporter Hildy Johnson (Pat O'Brien) who has vowed to quit the business and marry his new sweetheart (Mary Brian). But when a political radical (George E. Stone) escapes from custody on the eve of his hanging, the reporter's room is plunged into comedic chaos, and Hildy's brash editor (Menjou) sees it as an opportunity to manipulate the reporter into staying.

Now, at last, Kino Lorber has released a restoration by the Library of Congress, drawn from the surviving 35mm elements of this landmark early-talkie. The picture and sound quality are as good as we're ever likely to see." - Leonard Maltin, IndieWire

"It was great to see it in 1080P and from such a strong source considering all the poor quality digital copies that have floated around.... The Kino Classics Blu-ray provides the best opportunity to see 1931's The Front Page in your home theater and there is further value with the commentary and other extras... I was impressed with this package. " - Gary Tooze, DVD Beaver