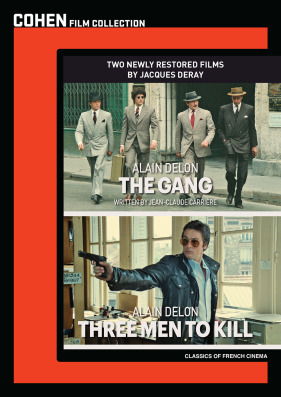 THE GANG (1977): In 1945, as World War Two comes to a close, five small time crooks unite to form a gang lead by the charismatic Alain Delon. After several bold robberies they become notorious as “the front-wheel drive gang.” The police attempt to stop their crime spree with little success, but how long will their luck last? / THREE MEN TO KILL (1980): In this Gritty, violent and suspenseful thriller, Delon plays Gerfaut who comes to the aid of a man laying wounded in the road, not knowing the man has taken two bullets to the belly. Soon he becomes the target for the killers, who see him as a dangerous witness. But Gerfaut has been around the block a couple of times and he won’t be so easily eliminated.