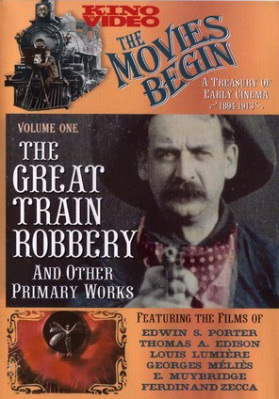 The Great Train Robbery and Other Primary Works (DVD)

The genesis of the motion picture medium is vividly recreated in this unprecedented collection of the cinema's formative works. More than crucial historical artifacts, these films reveal the foundation from which the styles and stories of the contemporary cinema would later arise.

An animated rendering of Eadweard Muybridge's primitive motion studies (1877-85) begins the program, immediately defining the compound appeal of cinema as both a scientific marvel and sensational popular entertainment.

This is followed by the works of Louis and Auguste Lumiere.