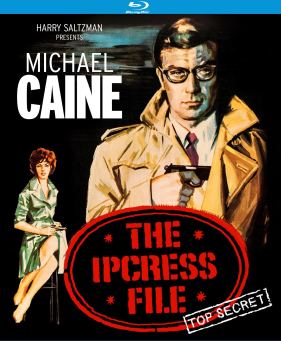 From Harry Saltzman, the producer of James Bond classics Dr. No, Goldfinger, Thunderball and On Her Majesty’s Secret Service, comes a film widely recognized as one of the greatest spy thrillers of all time. The Ipcress File is the first film in the series of Harry Palmer mysteries, based on the bestsellers by Len Deighton (Funeral in Berlin), that made Michael Caine (Gambit, The Black Windmill) a star. It is the height of the cold war, and ex-thief Harry Palmer (Caine), now reluctantly working as a secret agent, has been called in to investigate a strange occurrence among a number of leading scientists. It seems the scientists have been kidnapped, but reappear only days after the kidnapping, brainwashed and useless. During the course of the investigation, a tape is uncovered with the word “Ipcress” on it. This stylish classic was directed by Sidney J. Furie (The Appaloosa), shot by Otto Heller (Peeping Tom) and edited by Peter R. Hunt (From Russia with Love), with production design by Ken Adam (Dr. Strangelove) and music by John Barry (Diamonds Are Forever). The great cast includes Nigel Green (Let’s Kill Uncle), Guy Doleman (Billion Dollar Brain), Sue Lloyd (The Bitch) and Gordon Jackson (The Great Escape).

TRAILERS FROM HELL with Howard Rodman