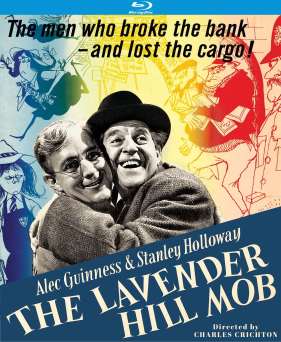 The Men Who Broke the Bank and Lost the Cargo! Sir Alec Guinness (The Captain’s Paradise) received his first Oscar nomination for Best Actor in a Leading Role for his delightful performance as Henry Holland, a meek clerk who devises an ingenious plan to rob a fortune in gold bullion from his own bank. But when Henry and his odd accomplice (Stanley Holloway, My Fair Lady) melt the gold into souvenir Eiffel Towers to smuggle into France, their perfect crime becomes a disastrous caper of Cockney crooks, customs chaos and an ill-timed group of schoolgirls, all leading to some of the most hilarious and unexpected surprises in criminal history. Sidney James (of the Carry On series) and a young Audrey Hepburn (Sabrina) co-star in this beloved Ealing Studios hit directed by Charles Crichton (Dead of Night) that won the Academy Award for Best Screenplay by T.E.B. Clarke (Who Done It?). Beautifully shot by the great Douglas Slocombe (Robbery, Raiders of the Lost Ark).