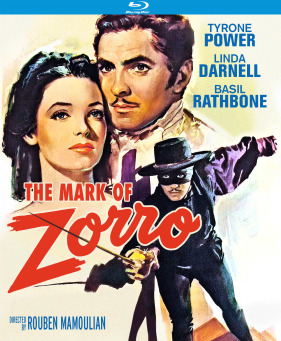 The Mark Of Zorro is regarded by most as the finest telling of the Zorro legend – screen icon Tyrone Power (Rawhide) stars as 19th century nobleman Don Diego de Vega, whose father, the mayor of Los Angeles, is removed from office by the sinister Captain Esteban Pasquale (Basil Rathbone, The Black Sleep), and a new corrupt regime. By day, the crooked politicians rob the citizenry at every turn, and at night, Don Diego, wearing a mask, defies their laws and avenges the innocents. As he leaves his trademark - the letter "Z" - wherever he goes, he also leaves an impression on the mayor's niece (Linda Darnell, Hangover Square), who can't help but love the hero in disguise. Featuring top-notch direction by the great Rouben Mamoulian (Love Me Tonight, Blood and Sand). Nominated for Best Original Score.

"The Mark of Zorro comes to Blu-ray in a beautiful and inviting transfer that does the classic film justice. Tyrone Power, Linda Darnell, and Basil Rathbone lead a sensational cast in the telling of this famous tale of old California."

"Douglas Fairbanks Sr. wowed in the silent classic. Antonio Banderas had one of his sexiest most satisfying vehicles in The Mask Of Zorro in 1998. But Tyrone Power owns the part with the 1940 version, which is one of those studio system peaks where every element is delivered by people at the top of their craft. Toss in one of the best sword fights of all time and you really can’t go wrong with this grand adventure."