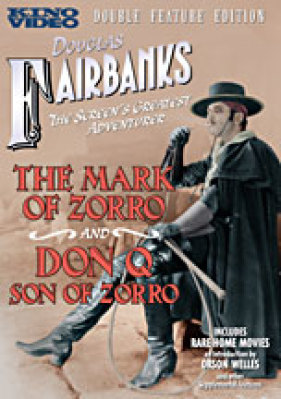 In The Mark Of Zorro, his first full-blown effort at the costume thriller, Fairbanks portrays Don Diego Vega, a comically effete young nobleman with a taste for tasseled sombreros and juvenile silk-hanky magic tricks. But when danger calls, Diego swathes himself in black, straps on a well-honed sword and storms the countryside as the mysterious Zorro, slicing his initial into the faces of the "sentinels of oppression," pausing only to boldly romance the woman (Marguerite De La Motte) to whom his shy alter-ego can hardly summon the courage to speak. (100 minutes)

Returning to the legend that inspired his first swashbuckling adventure, Fairbanks appeared in Don Q, Son Of Zorro. Don Cesar De Vega (Fairbanks) crosses swords with a vicious member of the Queen's Guard (Donald Crisp, who also directed), and steals the affection of a young heiress (Mary Astor). When the officer frames the young upstart for murder, Don Cesar fakes his own death and retreats to the crumbling ruins of the family castle where he plots his vengeance. (110 minutes)