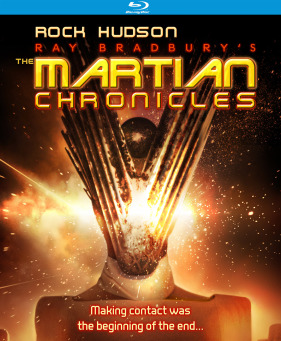 Newly Mastered in HD! Making contact was the beginning of the end… From the mind of legendary writer Ray Bradbury (Fahrenheit 451, Something Wicked This Way Comes) springs what is perhaps his most epic vision. Capturing mankind's first venture into the colonization of another planet – and its tragic first contact with another species - The Martian Chronicles is a stunning achievement that will take you from the edge of your seat and to the stars. Earth is on the verge of extinction. To survive, mankind must find another place to live. And when three expeditions to Mars, headed by Col. John Wilder (Rock Hudson, Avalanche), find suitable conditions for relocations, humans pour in by the shipload, bringing the old evils of Earth with them. As Wilder begins to heed the lessons of the dying Martian civilization, can he save humanity from repeating its own doom? Michael Anderson (Logan’s Run, Orca) directed this epic mini-series featuring Gayle Hunnicutt (Marlowe), Bernie Casey (Sharky’s Machine), Darren McGavin (TV’s The Night Stalker), Roddy McDowall (Fright Night), Bernadette Peters (The Jerk), Joyce Van Patten (The Falcon and the Snowman), Fritz Weaver (Black Sunday), Maria Schell (The Hanging Tree) and James Faulkner (TV’s Game of Thrones).