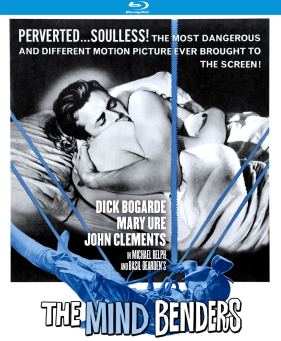 Brand New 4K Master! When the Dark Side of the Mind Is Opened, Can It Ever Be Closed Again? A government scientist commits suicide while clutching a briefcase full of cash, and the police accuse him of being a Communist spy. But when his friend Dr. Henry Longman (Dirk Bogarde, Accident, Modesty Blaise) suspects that the death may have been the result of brainwashing, he decides to prove his theory by subjecting himself to sensory deprivation. Can the doctor resist the experiment’s sadistic side effects… or will he fall under the control of The Mind Benders? Mary Ure (Where Eagles Dare) and Wendy Craig (The Servant) co-star this classic 1963 sci-fi thriller directed by Basil Dearden (Dead of Night, The Man Who Haunted Himself) that went on to influence Ken Russell’s mind-bending Altered States. Written by James Kennaway (Tunes of Glory) and beautifully shot by Denys N. Coop (Billy Liar) with a rousing score by Georges Auric (The Wages of Fear).