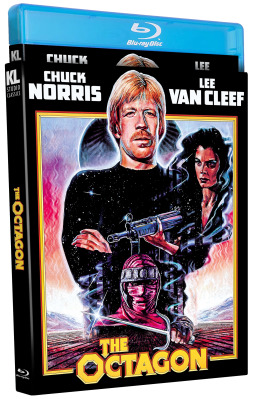 Martial arts superstar Chuck Norris (A Force of One, Code of Silence) teams up with screen legend Lee Van Cleef (The Good, the Bad and the Ugly, Death Rides a Horse) to take on a terrorist training camp known only as The Octagon in this deadly tale of revenge! Plagued by painful memories as a fighter, Scott James (Norris) has stayed away from the dark side of battle. But when a vengeance-seeking heiress (Karen Carlson, The Candidate) hires him to infiltrate an international terrorist operation run by his adopted brother (Tadashi Yamashita, American Ninja), Scott has no idea what he’s coming up against. Drawn closer and closer to The Octagon, Scott realizes his brother is using his skill in the deadliest manner, training men in the ninja style of killing. Now it’s up to Scott to battle his brother in the ultimate showdown of Good vs. Evil! Directed by Eric Karson (Black Eagle, Angel Town) and co-starring Richard Norton (Force: Five), Art Hindle (Invasion of the Body Snatchers), Aaron Norris (Lone Wolf McQuade) and Ernie Hudson (Ghostbusters), The Octagon is filled with hard-hitting Norris vs. Ninjas action!