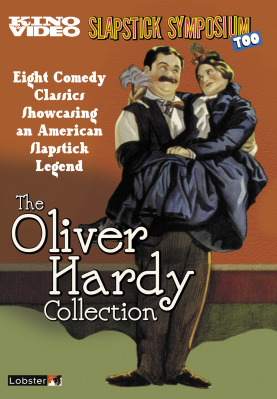 Better known as the rotund half of the classic comedy duo Laurel and Hardy, Oliver Hardy had an early career as a solo silent comic, often as a heavy in supporting roles. This collection of eight films reveals the evolution of Hardy's comic mastery as well as showcasing many lesser-known stars of the slapstick era.

Along Came Auntie 1926 23 min. Dir: Fred Guiol and Richard Wallace
In order to inherit $100,000 in diamonds from her visiting auntie, Vivian Oakland must pretend to be married to her ex-husband, a ridiculous musician (Hardy).

45 Minutes from Hollywood
1926 21 min. Dir: Fred Guiol
A country boy (Glenn Tryon) arrives in Hollywood and encounters a strange collection of characters, including a clueless hotel detective (Hardy) and a cross-dressing thief (Laurel). This is Laurel and Hardy's first collaboration under Hal Roach .

Crazy to Act
1927 25 min. Dir: Earl Rodney
Ollie is a hapless, but rich, suitor who'll do anything for his future wife (Mildred June), even make a movie. This is Ollie's final film with producer Max Sennett.

The Sawmill
1921 25 min. Dir: Larry Semon and Norman Taurog
Larry Semon, Ollie's frequent collaborator, stars as a dimwitted logger competing with a whip-wielding foreman (Hardy) for the boss's daughter. The sawmill used in the epic film is a fully functional one, built exclusively for this production.

Should Sailors Marry? 1925 18 min. Dir: James Parrott and Jess Robbins
Home from the navy, Clyde Cook is ready to settle down with his new bride, oblivious to her ex-husband, a brutal wrestler, who rooms in her home.

Hop to It! 1925 23 min. Dir: Ted Burnstein
Before partnering with Stan Laurel, Ollie often teamed with the hilarious Bobby Ray. Here they enact a bellhop routine that is the slapstick quintessence.