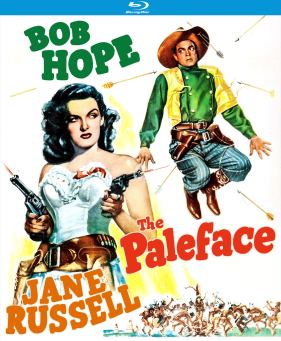 The Wild West has never been wilder or funnier than in this classic farce which introduced the Academy Award-winning song “Buttons and Bows.” In one of his most popular roles, comedy legend Bob Hope (My Favorite Brunette, Road to Morocco) plays “Painless” Peter Potter, a timid correspondence school dentist earning a shaky living in the lawless West. When “Painless” is seduced into agreeing to a quickie marriage by the voluptuous Jane Russell (The Outlaw), he thinks his luck has changed. Little does he suspect that Russell is actually sharpshooter Calamity Jane, hot on the trail of a dangerous renegade gang and that she is simply using “Painless” as her cover and unwitting dupe! This Old West burlesque, brightened by Technicolor and uproarious slapstick, went on to become one of Bob Hope’s best-loved films and his biggest box-office hit. Directed by Norman Z. McLeod (My Favorite Spy, Alias Jesse James) and co-starring Robert Armstrong (King Kong). In 1952, Hope and Russell returned for the sequel Son of Paleface, co-starring cowboy legend Roy Rogers and his trusty horse Trigger.