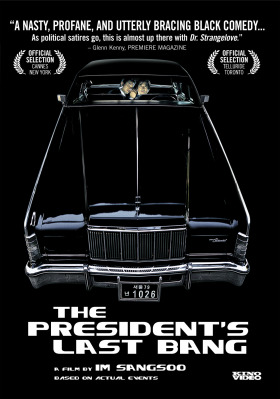 Though outwardly cynical, Korean CIA chief Kim secretly nurtures a personal disgust with his dissolute president's embarrassing appetites and impatience with his dissent-mired nation. During yet another banquet with President Park, the chief executive's corrupt top advisors and two wary party girls, Kim impulsively improvise a conspiracy that will change the course of world politics. When Kim and his thuggish enforcer Ju (Han Suk-kyu, Tell Me Something) make their move, they initiate a bloodbath that threatens to drown both victim and assassin.

Going where only Altman's M*A*S*H and Kubrick's Dr. Strangelove have traveled before, The President's Last Bang is both a "nasty, profane and utterly bracing black comedy," (Premiere Magazine) and "assumption-destroying, deeply entertaining political art" (Grady Hendrix, The New York Sun). Sang-soo's coolly dynamic camera reveals the most scandalous 24 hours in twentieth century Korean memory with fluid grace and uncommon skill, and his cast anchors The President's Last Bang's remarkable mix of expose, tragedy and farce with keenly observed characterizations. It is contemporary Asian cinema at its most courageous, audacious and insightful.

"A nasty, profane, and utterly bracing black comedy...As political satires go, this is almost up there with Dr. Strangelove." - Glenn Kenny, Premiere

"The most controversial movie ever released in Korea." - Grady Hendrix, The New York Sun

"If Im's political mud-drag occasionally ranges into scatological didacticism and overstylization...maybe it's only appropriate: if the making of history is a flawed process, so too is the documenting of it." - Mark Asch, The L Magazine