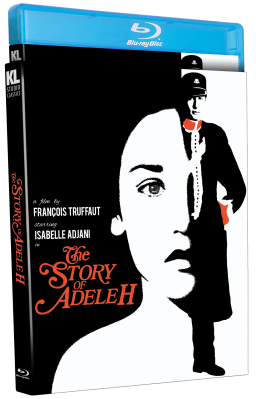 The Story of Adele H. (Blu-ray)

Love is my religion, the young woman wrote in her diary. The god of that religion was a British lieutenant in Nova Scotia, 1863—a soldier who wanted nothing to do with the woman who adored him. Cinema icon François Truffaut (The Bride Wore Black, Mississippi Mermaid) directs the stunning Isabelle Adjani (Possession, Camille Claudel) in the staggeringly powerful The Story of Adele H. The “H” stands for Hugo and, like her famed father Victor Hugo, Adele had a gift for writing. However, she wrote in code, creating a secret diary. Only in modern times was the diary deciphered, revealing the true-life story of Adele’s obsessive quest to make the soldier love her. Impeccably photographed by Nestor Almendros (The Wild Child, Days of Heaven), this musical, lilting film with a tidal pull to it (Pauline Kael) earned Adjani numerous Best Actress honors, including an Oscar nomination, and features Bruce Robinson (director of Withnail & I) as the obscure object of Adele’s desire.

In French and English with Optional English Subtitles