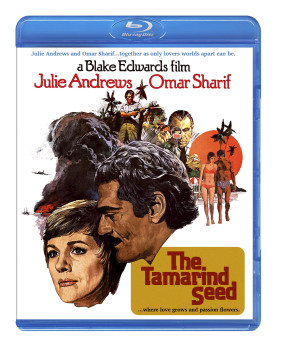 From the legendary director of The Pink Panther, Experiment in Terror, The Party and Victor Victoria. A man and a woman on opposite sides of the Cold War fall for each other in this romantic espionage drama from writer-director Blake Edwards, based on the best-selling novel by Evelyn Anthony (The Defector). Screen legend Julie Andrews (Mary Poppins, The Sound of Music) plays Judith Farrow, an assistant to the British Home Office who is vacationing in the Caribbean. Sparks fly when she meets Soviet military expert Feodor Sverdlov (Omar Sharif, Doctor Zhivago, Juggernaut), but when Judith’s superiors question his intentions, Judith must decide who to trust—and who to love. Two of the film's best features are the terrific color photography by the great Freddie Young (Lawrence of Arabia) and original musical score by celebrated maestro John Barry (Out of Africa). The stellar cast includes Anthony Quayle (The Guns of Navarone), Dan O’Herlihy (RoboCop), Sylvia Syms (Ice Cold in Alex) and Oskar Homolka (The Seven Year Itch).