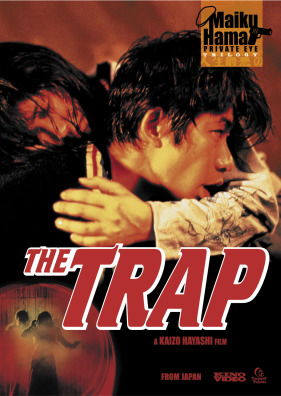 In love for the first time, cases booked solidly for months and a brand new fax machine prodding his office into the nineties, down-on-his-luck private eye Maiku "Mike" Hama has the world on a string at last. Or does he? In The Trap, things are not what they seem. When a hooded stranger appears in his office with the cryptic challenge "I want you to look for me," Hama is drawn into a string of bizarre serial murders that have Yokohama's police baffled and the city terrified.

Though decorated with the same retro film noir gloss as The Most Terrible Time in My Life and The Stairway to the Distant Past, this third chapter in writer-director Kaizo Hayashi's cult trilogy of hardboiled stories from the case files of Yokohama's smoothest private eye is by far the darkest. The Trap transforms from a playful pulp detective story into a modern nightmare as corpses of waterfront bar girls pile up and faked evidence fingers Hama as the killer. Stalked by a psychopath, chased by the cops and haunted by his mute girlfriend's mysterious past, every step Hama takes towards solving The Trap's gruesome mystery pushes him, and everyone around him, deeper into danger.

In this, his final widescreen outing as Mike Hama (before resurrecting him for a wildly popular Japanese TV series), Masatoshi Nagase (Mystery Train) is once again joined by Japanese B-film icon Jo Shisido (Gates of Flesh, Branded to Kill). "Recommended by the Japan Detective Association," The Trap is a fittingly lurid, harrowing and romantic conclusion to this celebrated series.