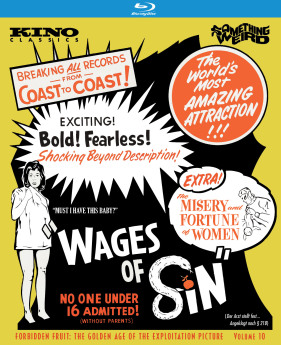 Weary of repackaging the creaky melodramas of the 1930s and ’40s, exploitation distributors in the 1960s began importing European films, which were more frank in their depictions of sexual matters. Any integrity the original films may have possessed was obliterated by the sensational titles and ad campaigns employed to market them to the American grindhouse. A perfect example is Der Arzt stellt fest... (The Doctor notes...), directed by Aleksander Ford (Mir Kumen On). A soap-style dramatization of life inside a women’s clinic, the film argues on behalf of birth control and safe, legal abortion. In the U.S., the film was released by Donn Davison as Wages of Sin and accompanied by a live lecture and additional childbirth shorts, both of which are included here. This Kino Classics edition includes another serious treatise on birth control (though one not sold on the exploitation circuit): The Misery and Fortune of Women, produced by Der Arzt stellt fest... co-producer Lazar Wechsler.