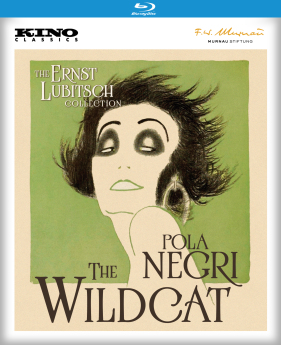 Ernst Lubitsch has long been recognized as the director of some of Hollywood’s greatest comedies, including Trouble in Paradise (1932) and Ninotchka (1939). However, he made some of his best films while an emerging filmmaker in his native Germany. The Wildcat (Die Bergkatze) is a madcap farce about a charming lieutenant (Paul Heidemann) who is captured en route by outlaws who roam the snow-covered mountains. When the bandit leader’s untamed daughter (silent superstar Pola Negri) falls for the young officer, a delicious sex comedy is set in motion. Peter Bogdanovich described The Wildcat as “an uproarious, hard-edged antimilitary spoof,” and ranks the film among the five funniest movies he’d ever seen (along with another early Lubitsch comedy, 1919’s The Doll). This edition includes a rare 1916 domestic comedy directed by and starring Lubitsch: Where Is My Treasure?

When I Was Dead (aka Where Is My Treasure? 1916, 37 Min.), directed by and starring Ernst Lubitsch

Audio commentary for When I Was Dead by Joseph McBride, author of How Did Lubitsch Do It?