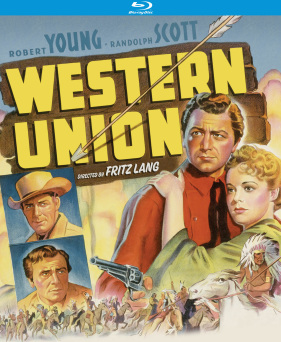 Western Union tells the story of two brothers whose destinies have brought them back together - Vance Shaw (Randolph Scott, Canadian Pacific) is an ex-criminal whose job is to protect the Western Union workers against attacks by gangs of bandits. Things become more complicated when he learns that his renegade brother, Jack Slade (Barton MacLane, The Maltese Falcon) is leading one of these gangs. The tension increases as the daughter of Vance's boss comes into the picture with her young and inexperienced suitor, Richard Blake (Robert Young, Father Knows Best). With Vance and Richard waging psychological warfare over her affections, gangs of bandits threaten the men at every turn. Legendary director Fritz Lang (Spies, Metropolis) makes striking use of Technicolor enhancing the actual western landscapes with virtuoso photography and signature Fritz Lang psychological suspense to elevate this western tale of destiny and desire. The top-notch cast also features Dean Jagger (Rawhide), John Carradine (The Hurricane) and Chill Wills (The Alamo).