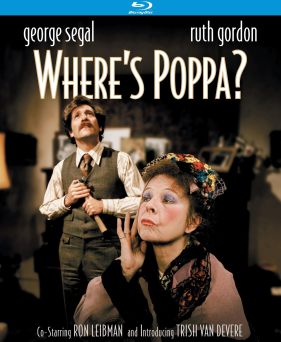 Insane and Outrageous! George Segal (California Split) and Ruth Gordon (Harold and Maude) give the funniest performances of their careers in this outrageous comedy that stomps gleefully on the idea of devotion to Mom above all. Featuring some of the boldest gags to ever hit the screen, Where's Poppa? is a riotously funny film. Segal is a man with a problem - his mother. He promised his late father he'd take care of her, but when he finally meets the girl of his dreams, his batty, eccentric mother is intent on turning his dreams into one huge nightmare. Soon he becomes obsessed with getting rid of her... before she gets rid of his girlfriend! The great Carl Reiner (The Jerk) directed this hilarious black comedy, featuring a stellar cast that includes Trish Van Devere (Harry in Your Pocket), Ron Leibman (The Super Cops), Bernard Hughes (The Hospital), Vincent Gardenia (Death Wish), Paul Sorvino (Goodfellas), Rob Reiner (All in the Family) and Garrett Morris (Saturday Night Live).