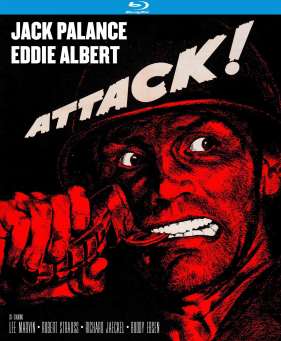 There’s dissension in the ranks during the Battle of the Bulge! From Robert Aldrich, the acclaimed director of Apache, Kiss Me Deadly, Hush… Hush, Sweet Charlotte, The Flight of the Phoenix, The Grissom Gang and The Longest Yard, comes this WWII classic starring Jack Palance (Ten Seconds to Hell), Lee Marvin (Prime Cut), Eddie Albert (The Gun Runners), Robert Strauss (Stalag 17), Richard Jaeckel (Ulzana’s Raid), Buddy Ebsen (Breakfast at Tiffany’s) and Peter van Eyck (Five Graves to Cairo). When Lieutenant Joe Costa (Palance) learns that his men died because their commander, Captain Cooney (Albert), was too much of a coward to join the fight, Costa issues a serious warning: Don’t let it happen again! But Cooney’s cowardice forces Costa into a fateful choice: continue to risk the lives of his men... or take the life of the captain. Beautifully shot by Joseph F. Biroc (The Towering Inferno), Attack is a tightly directed and gritty film that packs a wallop.