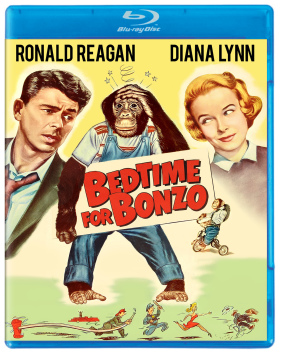 The theory of evolution has never been so zanily tested as it is in Bedtime for Bonzo starring future American President, Ronald Reagan (Desperate Journey). When Professor Peter Boyd (Reagan) proposes to the Dean’s daughter, there’s only one problem: her father. In an attempt to win his approval, he adopts a chimpanzee and sets out to prove “right and wrong” is learned, not inherited. He hires a beautiful young nursemaid to mother Bonzo, but will his fiancée believe it’s all just in the name of science? This hilarious romp proves some people will do anything for love. Film and TV veteran Frederick de Cordova (Buccaneer’s Girl) directs a fine cast that includes Diana Lynn (The Miracle of Morgan’s Creek), Walter Slezak (Lifeboat), Jesse White (Francis Goes to the Races) and Peggy the Chimp as the scene-stealing simian.