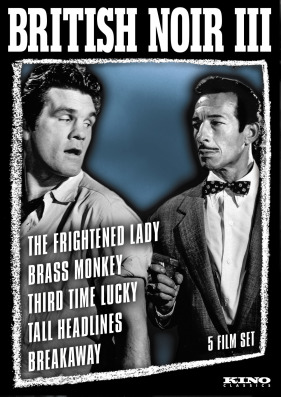 While the film noir movement may seem like a distinctly American phenomenon, British studios embarked on their own shadowy thrillers, laced with postwar cynicism. This five-film collection assembles some of the lesser-known Brit Noir titles from various British studios, featuring such major talents as actors Carole Landis, Glynis Johns, Mai Zetterling, Honor Blackman, Herbert Lom, Terry-Thomas and Dennis Price; and directors Terence Young, George King and Thornton Freeland. THE FRIGHTENED LADY (1940) A woman (Helen Haye, The 39 Steps) tries to protect her family's name when she discovers that one of her relatives is a murderer and that her niece Isla Crane (Penelope Dudley-Ward, Dangerous Cargo) may be his next victim. Based on an Edgar Wallace (Chamber of Horrors) play and directed by George King (The Face at the Window). Marius Goring (The Red Shoes) co-stars. Also-known-as The Case of the Frightened Lady. THE BRASS MONKEY (1948) Popular radio host Carroll Levis (playing himself) and Kay Sheldon (Carole Landis, I Wake Up Screaming) find themselves entangled in a web of smuggling and murder when a priceless “brass monkey” is stolen from a Japanese temple and smuggled into England. Directed by Thornton Freeland (Flying Down to Rio) and co-starring Herbert Lom (Return from the Ashes), Ernest Thesiger (The Old Dark House) and Terry-Thomas (The Green Man). THIRD TIME LUCKY (1949) In this British crime drama directed by Gordon Parry (Twilight Women) Lucky (Dermot Walsh, The Flesh and the Fiends), a compulsive gambler falls in love with a woman (Glynis Johns, The Court Jester) and believes she’s bringing him good luck, unfortunately she also catches the eye of one of his gambling rivals. Will his gambling addiction be the death of him? Co-starring John Stuart (Number 17), Helen Haye (The Skin Game) and Sebastian Cabot (The Time Machine). TALL HEADLINES (1952) Also-known-as The Frightened Bride, the 1952 British noir directed by the great Terence Young (Dr. No, Wait Until Dark) stars Mai Zetterling (Knock on Wood), Michael Denison (The Importance of Being Ernest), Flora Robson (Wuthering Heights), Dennis Price (Kind Hearts and Coronets), Naunton Wayne (The Lady Vanishes) and Mervyn Johns (Dead of Night). A family struggles to try to put their life back together after the eldest son is convicted of, and then executed for, murder. BREAKAWAY (1956) Suave, if a trifle elderly, private eye Tom ‘Duke’ Martin (Tom Conway, The Falcon Strikes Back) is on the trail of a secret formula and a kidnapped girl. This wonderful British noir was directed by Henry Cass (The Glass Mountain) and beautifully shot in glorious black-and-white by Monty Berman (The Flesh and the Fiends). Co-starring Honor Blackman (Goldfinger and TV’s The Avengers) and John Colicos (Raid on Rommel).