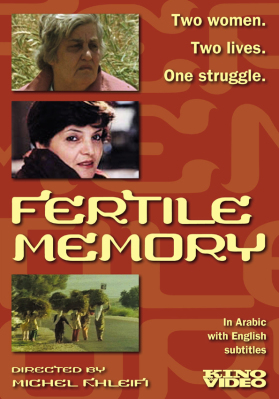 The first full length film to be shot within the disputed Palestinian West Bank "Green Line," Fertile Memory is the feature debut of Michel Khleifi, acclaimed director of the Cannes Film Festival triumph, Wedding in Galilee. Lyrically blending both documentary and narrative elements, Khleifi skillfully and lovingly crafts a portrait of two Palestinian women whose individual struggles both define and transcend the politics that have torn apart their homes and their lives.

Grandmother Romia fights an unending legal battle with the Zionist authorities who confiscated her ancestral land soon after the Israeli occupation in 1947. With her family scattered all over the globe while she works in an Israeli factory, Romia doggedly maintains a dignity and passion that for her are the difference between mere subsistence and tenacious survival. Sahar Khalifeh, a divorced novelist and young mother living in the West Bank, struggles to maintain a modern role for herself within her increasingly intolerant occupation community. Representing both contemporary Arab womanhood and vanguard Palestinian conscience, Sahar must balance the changes in her world after the Six Day War with the changes in herself after achieving personal emancipation.

With painterly flair, Khleifi elevates the everyday details of Romia's and Sahar's lives to a timelessness as irresistible as the hauntingly beautiful desert landscape they fight for. Whether in a tearful lullaby or a sensuously performed lover's lament, the women of Fertile Memory lend tender and powerful voices to their people's chorus of outrage. Michel Khleifi's Fertile Memory puts a distinctively feminine expression on the ordinarily violent and male dominated face of Palestinian resistance.