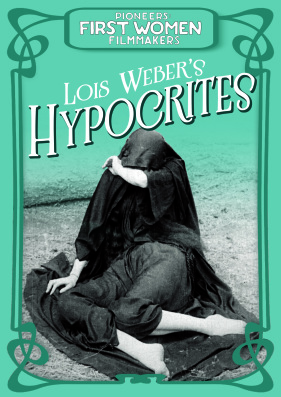 The most important and prolific of all American women directors of the silent era, Lois Weber entered films in 1907 at Gaumont, working alongside Alice Guy-Blaché. In the ensuing years, she and her husband Phillips Smalley acted in, directed, wrote, and edited films for Gaumont, Rex, and Universal. By 1914 Weber was a well-known director when she went to work for the Bosworth Company to make Hypocrites.

Hypocrites is an amazingly complex film in both narrative and technique, following the parallel stories of an early Christian ascetic and a modern minister, with most actors in dual roles. Gabriel (Courtney Foote) is a medieval monk who devotes himself to completing a statue of "Truth," only to be murdered by a mob when his work turns out to be an image of a naked woman. The contemporary Gabriel is the pastor of a large urban congregation for whom religion is a matter of appearances, not beliefs. The hypocrisy of the congregation is exposed by a series of vignettes in which the Naked Truth, literally portrayed by a nude woman, reveals their appetites for money, sex, and power.

Hypocrites was a shocking and controversial film whose release was held up for many months by the difficulty of distributing a film with full nudity. Weber’s sincerity and reputation allowed her to use something that in the hands of a male director would have been considered scandalous and immoral. Widely admired at the time for extraordinary use of multiple exposures and intricate editing, Hypocrites propelled Weber to the front ranks of silent directors.