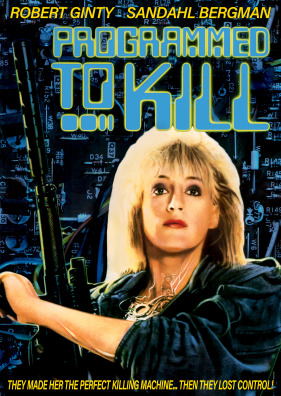 Action greats Robert Ginty (The Exterminator, Exterminator 2) and Sandahl Bergman (Conan the Barbarian, She) square off for deadly combat in this high-tech tale of a lethally beautiful killer android on a rampage of inhuman revenge! Captured in a daring raid by ex-CIA agent Eric Mathews (Ginty), the merciless terrorist hit-woman Samira (Bergman) is brought to the U.S., where she undergoes experimental brain surgery. Transformed into an unstoppable bionic warrior, she returns to the Middle East, where she obediently wipes out all of her former comrades. But when a malfunction reactivates Samira’s human memories, she launches into a frenzy of cold-blooded vengeance. As she methodically terminates her CIA adversaries, only Mathews can halt her murderous onslaught! Directed by Allan Holzman (Forbidden World), Programmed to Kill (a.k.a. The Retaliator) is a gripping, futuristic action thriller that also stars James Booth (Avenging Force) and a young Paul Walker (Fast & Furious).