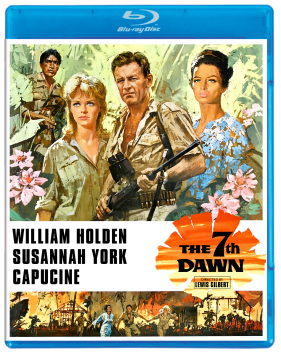 The 7th Dawn (aka The Seventh Dawn)

From Lewis Gilbert, the acclaimed director of The Slasher, Cast a Dark Shadow, Alfie, The Spy Who Loved Me, Moonraker and Educating Rita, comes this exotic adventure packed with action and political intrigue. Following the Second World War, Ferris (William Holden, The Devil’s Brigade), an American guerrilla fighter, has remained in the Malayan jungle to become a prosperous plantation owner with the beautiful Dhana (Capucine, What’s New Pussycat) by his side. But his old war buddy (Tetsuro Tamba of Gilbert’s You Only Live Twice) has returned from Moscow to lead a terrorist insurrection against the British with the goal of Malayan “independence” under a Communist regime. When Ferris fails to persuade his friend to stop the attacks, the government links him to the uprising and arrests Dhana on a charge of high treason. Caught between a rock and a hard place, Ferris must choose between protecting his old friend or freeing his captive lover. Featuring excellent support from Susannah York (The Killing of Sister George), stunning Technicolor cinematography by Freddie Young (Lawrence of Arabia) and a lush score by Riz Ortolani (The Hunting Party), The 7th Dawn is guaranteed to keep you on the edge of your seat!