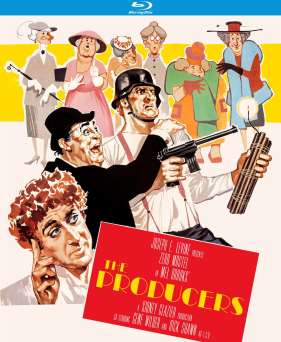 From Mel Brooks, the legendary director of Blazing Saddles, Young Frankenstein, High Anxiety, History of the World: Part I and Spaceballs, comes this startling, stunning, outrageous and breathtaking comedy starring screen icons Zero Mostel (A Funny Thing Happened on the Way to the Forum) and Gene Wilder (Haunted Honeymoon). Low-rent Broadway producer Max Bialystock (Mostel) and his high-strung accountant, Leo Bloom (Wilder), discover that, with the help of a few gullible investors, they can make more money on a flop than on a hit! Armed with the worst show ever written (“Springtime for Hitler”) and an equally horrific cast, this double-dealing duo is banking on disaster. But when their sure-to-offend musical becomes a surprise smash hit, they find themselves in the middle of a Broadway blitzkrieg! Brooks won an Oscar for his original screenplay, and Wilder, in his star-making performance, was nominated for Best Actor in a Supporting Role. Co-starring comedy greats Dick Shawn (It’s a Mad Mad Mad Mad World) and Kenneth Mars (What’s Up Doc?).