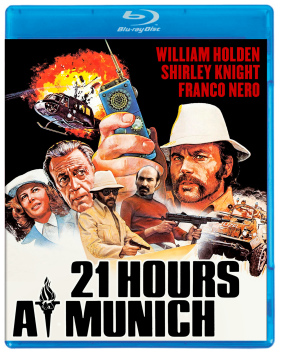 September 5, 1972. The darkest day in sports history. Some 900 million sports fans tune in to watch the Olympics on TV. Instead, they see the most shocking scenes unfold... screen legend William Holden (The Devil’s Brigade, Breezy) and Shirley Knight (The Group, Juggernaut) turn this real-life catastrophic event into a mesmerizing story of suspense, anger and disbelief. The perpetrators wear tracksuits, but they are anything but athletes. Known as “Black September,” these Arab terrorists storm the Olympic village before dawn and take the Israeli team hostage. They make their demands as the minutes tick by. But from this point on, it isn’t about who takes home the gold. It’s about who comes home at all. Franco Nero (The Mercenary), Anthony Quayle (The Tamarind Seed) and Richard Basehart (The Satan Bug) co-star in this pulse-pounding TV movie from veteran director William A. Graham (Change of Habit) based on Serge Groussard’s book The Blood of Israel.