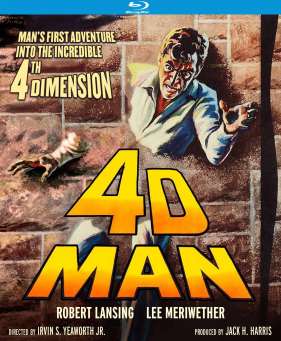 Brand new 4K restoration from the original camera negative! He walks through walls of solid steel and stone… into the 4th dimension! From legendary producer Jack H. Harris and director Irvin S. Yeaworth Jr., the team behind cult favorites The Blob and Dinosaurus!, comes this sci-fi horror classic starring Robert Lansing (The Grissom Gang), Lee Meriwether (Catwoman/Miss Kitka of Batman: The Movie), Robert Strauss (Stalag 17), James Congdon (The Left Handed Gun) and Patty Duke (The Miracle Worker). Science whiz Dr. Tony Nelson (Congdon) has made an amazing discovery: he has developed a method of stimulating the molecular structure of solid objects so that they can be joined or passed through one another. Stumbling upon this incredible secret is Tony’s older brother, Scott (Lansing), a fellow scientist who decides to take the experiment one step further—and soon finds himself able to pass through doors and walls. But his newfound freedom of movement has unforeseen side effects, for each time the power is used, Scott ages a bit, and only by touching other living beings and draining their energy (and thus, their lives) can he maintain his age. In addition, this incredible force is driving Scott quite mad... and he’s just noticed his beautiful would-be fiancée (Meriwether) expressing an interest in his brother Tony. Filled with eye-popping special effects, 4D Man takes sci-fi to a whole new dimension!