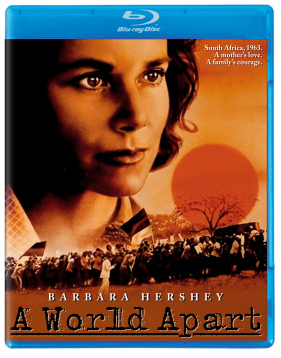 Available: Feb 7th 2023. Pre-orders are generally sent several says in advance of street date. Order may not be split.

South Africa, 1963. Communist Gus Roth (Jeroen Krabbé, No Mercy) is forced to flee Johannesburg to escape arrest, leaving his activist wife Diana (Barbara Hershey, Last of the Dogmen) to continue their crusade against apartheid. But when Diana is wrenched from her three daughters and jailed under the notorious 90-day Detention Act, she and her family face the ultimate sacrifice in the fight for freedom. The feature-film directorial debut of Chris Menges, the Oscar-winning cinematographer of The Killing Fields and The Mission, A World Apart is both a tender coming-of-age story and an emotionally powerful indictment of political oppression. Co-starring David Suchet (TV’s Poirot), Paul Freeman (Raiders of the Lost Ark), Tim Roth (Bodies, Rest & Motion) and Jodhi May (The Last of the Mohicans), and featuring a stirring score by Hans Zimmer (The Lion King).