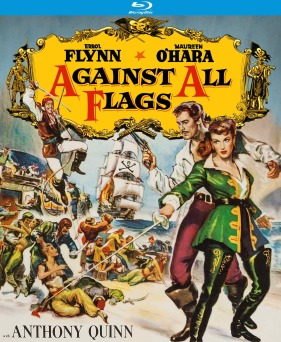 Against All Flags (Blu-ray)

Hollywood legends Errol Flynn (Captain Blood, The Sea Hawk), Maureen O’Hara (The Black Swan, Lisbon) and Anthony Quinn (Zorba the Greek, The World in His Arms) team for a swashbuckling adventure in Against All Flags. Onboard a 1700s merchant ship, determined British naval officer Lieutenant Brian Hawke (Flynn) bravely endures twenty lashes with the intent of using the wounds to help him go undercover on the pirate island of Libertania. Once there, however, Hawke is brought before the colony’s head pirates, the Captains of the Coast, and forced to prove himself in a fight to the death. As he endures the various trials of a pirate, he finds himself drawn to the beautiful buccaneer Spitfire (O’Hara) and torn between her and his mission to disarm the renegade settlement. Veteran filmmaker George Sherman (The Sleeping City, Big Jake) directed this Technicolor epic beautifully shot by legendary cinematographer Russell Metty (Spartacus, Buccaneer’s Girl) and filled with buxom maidens, breathtaking swordplay and dazzling spectacle. Co-starring screen and stage acting great Mildred Natwick (Barefoot in the Park, Dangerous Liaisons).