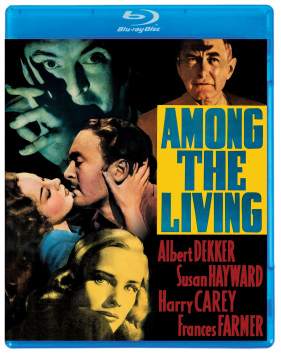 Among the Living (Blu-ray)

Albert Dekker (Dr. Cyclops), Susan Hayward (Back Street), Harry Carey (The Shepherd of the Hills) and Frances Farmer (Come and Get It) star in this gripping cinematic blend of noir thrills and Southern Gothic chills. Paul Raden (Dekker) is a hopeless maniac. Twenty-five years ago, he suffered permanent brain damage trying to defend his mother from his brutal father. Paul’s last memory, before descending into the shadows of insanity, was his mother’s agonized scream. Locked away in secrecy ever since, he escapes from his prison on the night of his father’s funeral and stalks among the living. It’s up to Paul’s identical twin John (also Dekker) to put a stop to his brother’s vicious spree. Stuart Heisler (The Glass Key, Blue Skies) directed this eerie film noir with expressionistic black-and-white photography by Theodor Sparkuhl (Beau Geste, Wake Island) that perfectly complements its dark story of madness and murder.