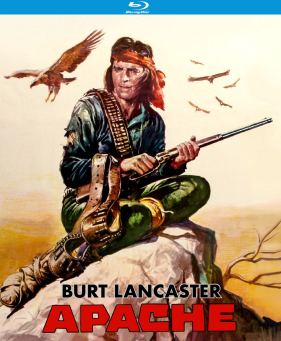 From Robert Aldrich, the outstanding director of Vera Cruz, Attack, What Ever Happened to Baby Jane?, The Dirty Dozen, The Killing of Sister George and Ulzana’s Raid, comes this action-packed western that pulsates with the power and passion of an Indian war drum. Apache explodes with spectacular battle sequences, breathtaking chases and unbridled suspense. After years of bloody fighting with settlers on the American frontier, Apache Chief Geronimo (Monte Blue, Key Largo) is forced to submit to a humiliating surrender. But his fiercest warrior, Massai (Burt Lancaster, The Train), refuses to accept defeat. With enormous strength and razor-sharp cunning, Massai battles the relentless U.S. Cavalry, struggling to stay one step ahead of the highly trained soldiers who have sworn to track him down. And as his crusade escalates into a final epic showdown, Massai knows that he must persevere, not only for his life, but also for the pride of his entire race. Beautifully shot by Ernest Laszlo (Judgment at Nuremberg) and co-starring Jean Peters (Viva Zapata!), John McIntire (Horizons West), Charles Bronson (The White Buffalo) and John Dehner (The Day of the Dolphin).