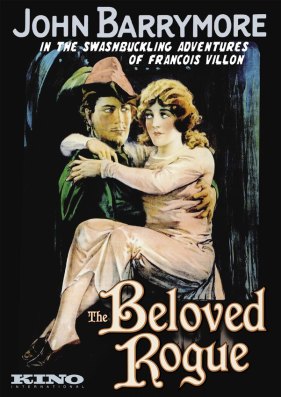 John Barrymore in the swashbuckling adventures of Francois Villon

John Barrymore sought to out-swashbuckle Douglas Fairbanks in his breathless depiction of France's rapscallion poet, thief and vagabond: François Villon (1431-1463). To prove his mettle, he bounds over the snowy rooftops of Paris, scales a castle tower, and is hurled skyward by the royal catapult‹but this is no mere stunt picture. Barrymore wielded a simmering sexuality that Fairbanks lacked, endowing the film with an element of eroticism that perfectly suits Villon, who loved "France earnestly, Frenchwomen excessively, French wine exclusively."

A lavish spectacle boasting the set designs of William Cameron Menzies (The Thief of Bagdad), THE BELOVED ROGUE is Hollywood myth-making at its most ambitious...and entertaining.

Beyond Barrymore, the cast is sprinkled with celebrated character actors. Fresh from a series of diabolical roles in the German silent cinema, Conrad Veidt (The Man Who Laughs) made his American film debut as the sinister King Louis XI. Appearing here as the scheming Thibault d'Aussigny and François's sidekick Beppo the Dwarf, Henry Victor and Angelo Rossitto would reunite five years later in Tod Browning's Freaks.