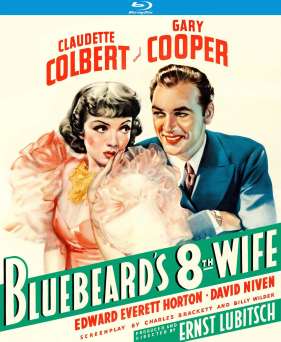 From Ernst Lubitsch, the legendary director of The Merry Widow, Angel, Ninotchka, The Shop Around the Corner, To Be or Not to Be and Heaven Can Wait, comes this classic romantic comedy starring screen icons Claudette Colbert (The Palm Beach Story), Gary Cooper (Beau Geste) and David Niven (Separate Tables) with a screenplay by Billy Wilder (The Lost Weekend) and Charles Brackett (A Foreign Affair). Those laughing eyes, those glorious cheekbones! The silver-screen queen of the ’30s and ’40s is as captivating as ever in this hilarious comedy set in the French Riviera! Colbert portrays Mademoiselle Nicole De Loiselle, the lovely daughter of a destitute aristocrat, who catches the eye of dashing millionaire Michael Brandon (Cooper). After a brief courtship, she accepts his marriage proposal, but the bride is shocked to learn that her betrothed has been down the aisle before… seven times. Determined to teach him a lesson, she makes a mockery of their matrimony in a variety of side-splitting situations; but alas, two can play the crazy game of love. Edward Everett Horton (Top Hat) co-stars as Nicole’s father, the Marquis De Loiselle.