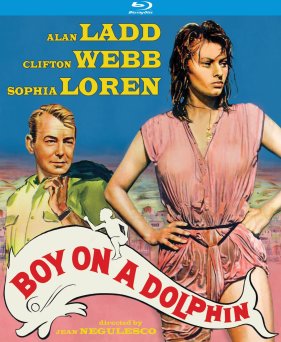 Boy on a Dolphin (Blu-ray)

A Brand New 4K Restoration! Italian goddess Sophia Loren (Five Miles to Midnight) made her American film debut in this adventure yarn set upon the Greek island of Hydra. There in a seaside village the beautiful Phaedra (Loren), a sponge diver finds a breath-taking gold statue of a boy riding a dolphin. Her slimy and crooked boyfriend (Jorge Mistral, Luis Bunuel’s Wuthering Heights) wants to sell it to an unscrupulous and wealthy art collector, but Phaedra wants to hand it over to an American anthropologist, Jim Calder (Alan Ladd, Shane), who would return it to the Greek government, so it could be displayed in a prominent Greek museum. Beautifully shot in cinemascope by Milton R. Krasner (23 Paces to Baker Street) with a screenplay by Ivan Moffat and Dwight Taylor (based on a novel by David Divine, Dunkirk) and great direction by Jean Negulesco (Daddy Long Legs). Co-starring Clifton Webb (Titanic).

"Kino Lorber has done a terrific job presenting this film under its KL Studio Classics banner in a brand new 4k 1080p Restoration. Picture and sound are excellent. ...Recommended."