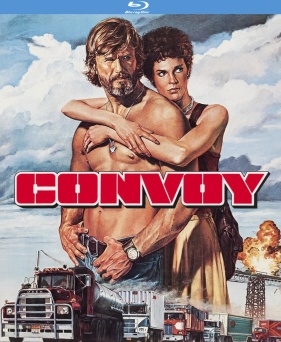 When the Western film, for many decades the staple of the American cinema, suffered a decline in the Seventies, a new sub-species helped fill the void - the trucking epic. The great Sam Peckinpah (The Wild Bunch) directed this action classic based on the runaway hit song, Convoy. Martin "Rubber Duck" Penwald (Kris Kristofferson, Vigilante Force) who, in pursuance of a feud with Sheriff Lyle "Cottonmouth" Wallace (Ernest Borgnine, Marty), unites scores of his fellow-drivers via Citizen Band radio into a gigantic mile-long convoy which, powered by pent-up frustrations and resentments as much as by diesel-fuel, rolls irresistibly along the Arizona highways towards the freedom of the Mexican border. The stellar cast includes Ali MacGraw (The Getaway), Seymour Cassel (Opening Night) and Burt Young (The Killer Elite) as Bobby "Love Machine" "Pig Pen".