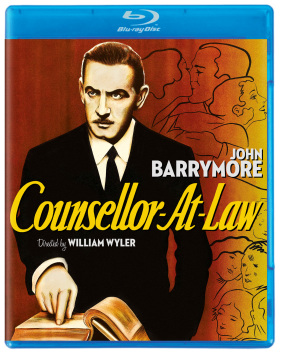 Directed by the illustrious William Wyler (The Good Fairy, Detective Story, The Big Country, Ben-Hur), the briskly paced Counsellor at Law is often cited as the best film to ever tackle the intricacies and pitfalls of the legal profession. George Simon (Hollywood legend John Barrymore, Dr. Jekyll and Mr. Hyde) is a successful attorney, climbing from a Jewish ghetto to elegant Art Deco offices in the Empire State Building. After allowing one of his former clients to commit perjury to win a case, George realizes he could be disbarred. The scandal convinces his wife to run away to Europe with another man, leaving George shattered and desperate to find out who his true friends really are. Flavored with social commentary and wry humor, Counsellor at Law is an exceptional example of the hard-boiled dramas that defined the Pre-Code cinema of the early 1930s. Co-starring Melvyn Douglas (Angel).