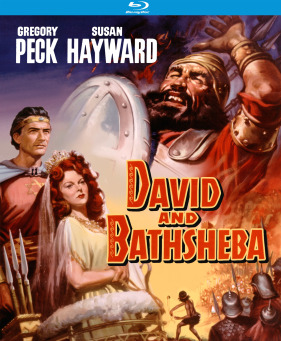 For this woman, he broke God’s own Commandment! Screen legend, Gregory Peck (Yellow Sky, Night People) stars in this gripping retelling of the beloved Old Testament story. King David (Peck) has killed Goliath, prevailed in countless battles, but cannot vanquish his illicit love for the beautiful Bathsheba (Susan Hayward, Rawhide, I Want to Live). David sends her husband, Uriah (Kieron Moore, Arabesque), into a hopeless battle, setting into motion his own downward spiral. Neglecting kingdom and faith, he incurs the wrath of God, the destruction of his country and the ill will of his people, who expect Bathsheba to pay the ultimate price for adultery. This gorgeously shot, rapturously acted and deeply moving tale of love, obsession, tragedy, loss and redemption is as beautiful as it is timeless. Directed by the great Henry King (Prince of Foxes) and co-starring Raymond Massey (The Hurricane). Nominated for five Oscars including Best Screenplay by Philip Dunne (The Robe) and Best Cinematography by four-time Academy Award winner Leon Shamroy (Planet of the Apes) ---- Cinematographer, Leon Shamroy was nominated for 18 Academy Awards and won four: The Black Swan (1943), Wilson (1945), Leave Her to Heaven (1946) and Cleopatra (1964).

"Once in 3000 Years" with Gregory Peck and Susan Hayward