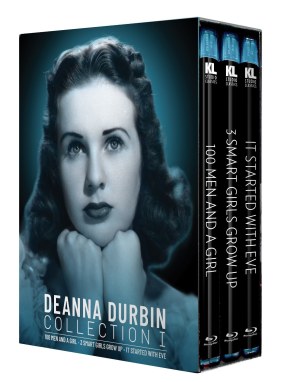 This collection features three classic films starring screen legend Deanna Durbin. 100 MEN AND A GIRL (1937) – Durbin shines in 100 Men and a Girl, a delightful story of an inventive and determined young woman who will stop at nothing to get what she wants. The daughter of an unemployed musician, Patricia Cardwell (Durbin) decides she will persuade conductor Leopold Stokowski to help her launch an orchestra that will employ her widowed father (Adolph Menjou, The Front Page) and 99 other out-of-work musicians. Though faced with this seemingly impossible task, Patricia leads her unemployed orchestra to the home of the unsuspecting Stokowski and conducts them in Liszt’s “Second Hungarian Rhapsody” from the top of his staircase. His reaction is priceless, as are the numerous musical numbers, including “It’s Raining Sunbeams” and “A Heart That’s Free.” This enchanting musical treat is a triumphant celebration of Hollywood and a tribute to one of the cinema’s best-loved stars. 3 SMART GIRLS GROW UP (1939) – Penny (Durbin) has a knack for matchmaking and realizes that her own two sisters Joan (Nan Grey) and Kay (Helen Parrish) could use her help since one of them is in love with the other’s boyfriend. In attempting to manipulate the situation so that both sisters end up with the ideal fiancé, Penny only creates further problems until her father is forced to intervene on her behalf. Often noted as Durbin’s first young adult role, this breezy, lighthearted entry co-stars Robert Cummings (The Bride Wore Boots), Charles Winninger (Nothing Sacred) and William Lundigan (Follow Me Quietly). IT STARTED WITH EVE (1941) brings together the exceptional talents of Durbin and Charles Laughton (Witness for the Prosecution) in a hilarious misadventure of love and romance. An old millionaire (Laughton), believed to be in his final days, wishes to meet the young lady that his son Johnny (Robert Cummings, The Bride Wore Boots) is planning to wed. When the future bride-to-be is unavailable, the dutiful son finds a quick replacement in a random hat-check girl (Durbin). Surprisingly, she quickly steals his heart and when his father makes a remarkable recovery, Johnny must juggle the phony bride-to-be with the newly arrived true bride of his heart. It Started with Eve is a priceless cinematic gem! All three films were directed by the great Henry Koster (The Bishop’s Wife, The Robe).