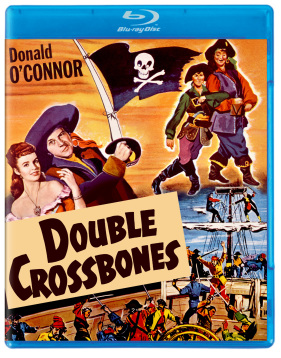 Donald O’Connor (Singin’ in the Rain) stars as a bumbling shopkeeper’s apprentice who finds his true calling on the South Seas in the comedy adventure Double Crossbones. When Davey Crandall (O’Connor) and his coworker, Tom Botts (Will Geer, Broken Arrow), are falsely accused of dealing in stolen treasure, they try to find refuge onboard Captain Ben Wickett’s ship. Through a series of hilarious mishaps, Davey soon finds himself the supposed captain and is embraced by the ruthless pirate community. Can this former man of peace still find his way into the heart of the righteous Lady Sylvia (Helena Carter, Time Out of Mind) or will his newfound pirate ways send her into the arms of another man? Set sail for romance and redemption in this lively Technicolor classic from director Charles Barton (Abbott and Costello Meet Frankenstein).