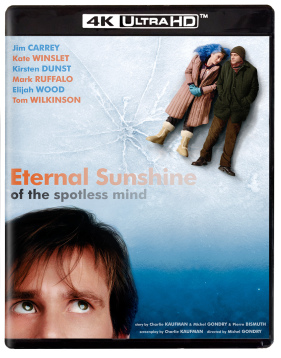 From acclaimed writer Charlie Kaufman (Being John Malkovich) and visionary director Michel Gondry (The Science of Sleep) comes Eternal Sunshine of the Spotless Mind, a sci-fi love story starring Jim Carrey (Man on the Moon) and Kate Winslet (Titanic). Joel is stunned to discover that his girlfriend, Clementine, has had their tumultuous relationship erased from her mind. Out of desperation, he contacts the inventor of the process, Dr. Howard Mierzwiak, to get the same treatment. But as his memories of Clementine begin to fade, Joel suddenly realizes how much he still loves her. Co-starring Kirsten Dunst (The Virgin Suicides), Mark Ruffalo (Spotlight), Elijah Wood (The Lord of the Rings) and Tom Wilkinson (Michael Clayton), Eternal Sunshine takes you on a surreal journey through breakups, breakdowns and breakthroughs, with captivating performances (including Best Actress Oscar nominee Winslet) and dazzling creativity (which earned the Best Original Screenplay Oscar).

Eternal Sunshine of the Spotless Mind

Eternal Sunshine of the Spotless Mind