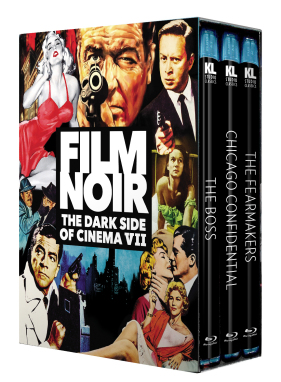 Film Noir: The Dark Side of Cinema VII [The Boss / Chicago Confidential / The Fearmakers] (Blu-ray)

This collection features three film Noir classics. THE BOSS (1956) – Noir and sci-fi specialist Byron Haskin (I Walk Alone, The War of the Worlds) takes on The Boss in this gritty crime classic. Following World War I, ruthless veteran Matt Brady (John Payne, 99 River Street) inherits the clout of his political kingpin brother and climbs the ladder of corruption all the way to the top of the state. His amoral practices and sheer arrogance lead to broken friendships (William Bishop, The Redhead from Wyoming) and romances (model-turned-actress Doe Avedon and Gloria McGehee, A Child Is Waiting) along the way. Based on the real-life scandal of Kansas City politico Tom Pendergast, The Boss is celluloid dynamite from the pen of Dalton Trumbo (Spartacus, Lonely Are the Brave), originally uncredited due to Hollywood’s blacklisting. CHICAGO CONFIDENTIAL (1957) – In the fast-paced, suspense-drenched Chicago Confidential, Brian Keith (The Rare Breed) battles corruption as hard-nosed State’s Attorney Jim Fremont. When union crooks in collaboration with a gambling syndicate try to pin a murder rap on uncooperative union leader Blane (Dick Foran, The Fearmakers), Fremont smells a set-up. Together with his co-worker fiancée Laura (Beverly Garland, D.O.A.), he launches an investigation to prove Blane’s innocence and to punish the true villains. Noir favorite Elisha Cook Jr. (The Killing) co-stars in this Windy City noir directed by Sidney Salkow (The Last Man on Earth) from the bestselling pulp novel by Jack Lait and Lee Mortimer (New York Confidential). THE FEARMAKERS (1958) – Directed by master of noir Jacques Tourneur (Cat People, Out of the Past), The Fearmakers is a potent parable about the power of people who control our ideas. Dana Andrews (The Ox-Bow Incident, Boomerang) stars as Alan Eaton, a Korean War veteran who returns home after being tortured and brainwashed as a P.O.W. and resumes work at a public relations firm in Washington, D.C. He finds that things aren’t quite as he left them, as he uncovers a hotbed of political manipulation that ensnares him in a web of suspicion. Communism and corruption run rampant in this riveting Cold War thriller co-starring Dick Foran (Chicago Confidential), Marilee Earle (Terror in a Texas Town) and Mel Tormé (The Big Operator).

NEW Audio Commentary for THE FEARMAKERS by Professor and Film Scholar Jason A. Ney